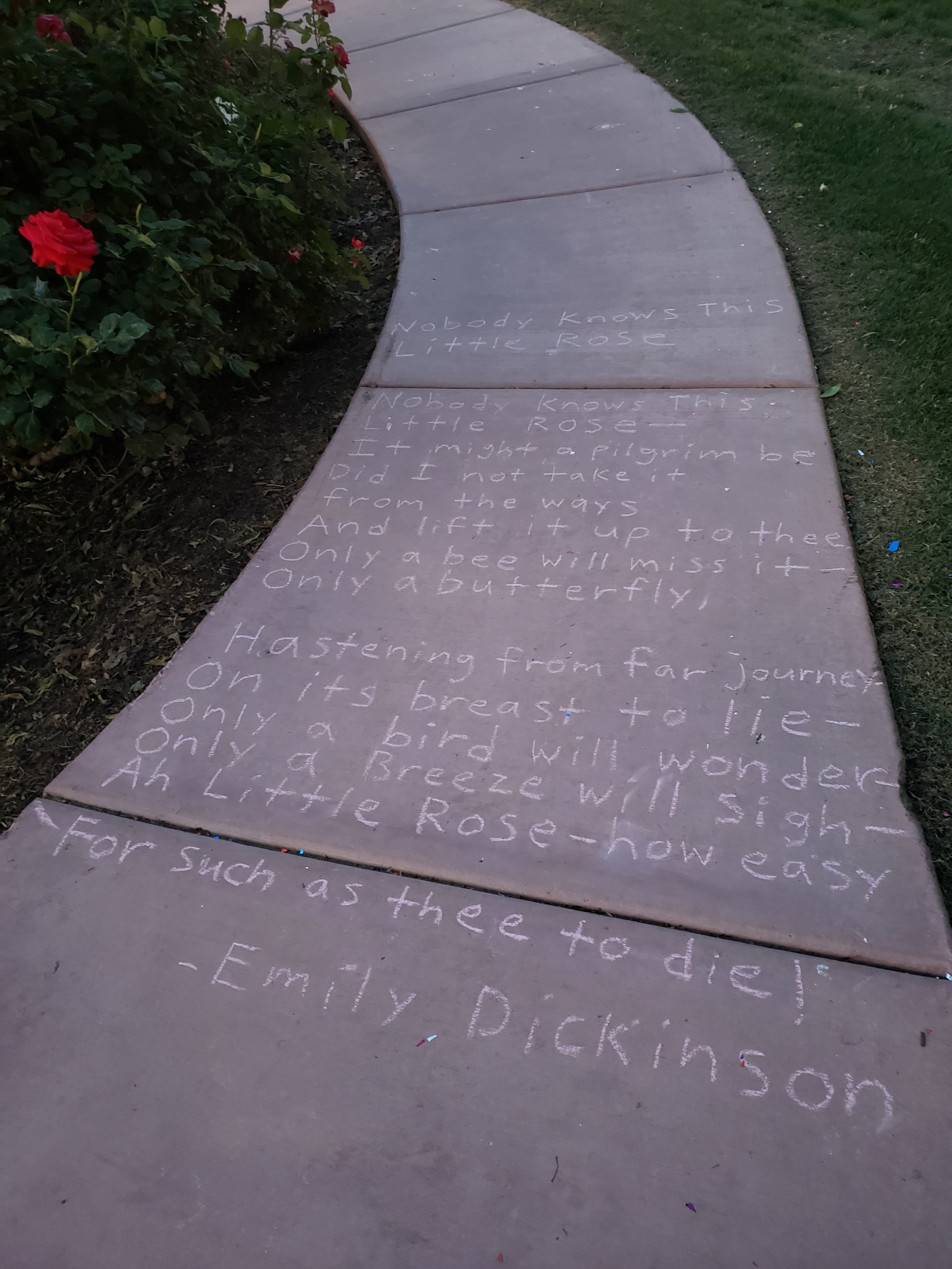 It’s hard to describe what the last month has been like for me. Have you ever learned a second language, or third or fourth perhaps (Yes, I am jealous of the polyglots out there) and learned a word that cannot be translated into your mother tongue? But you kind of wish that word existed in your first language because you’d like to use it as the meaning is so deep and powerful, or would just be convenient and effective to get your point across? Well, although I don’t have a full understanding of the word, the Portuguese term “saudade” comes to mind. Please see this valiant attempt at defining “saudade” here. Perhaps I feel a bit of the longing for April, and although it’s been only a few days past, I’m already missing National Poetry Month.

This was the second year I celebrated by writing a poem each day, following the challenge found here on this blog that blooms with poetry form instructions during April. Here’s a look back on how I celebrated this year in a more expansive way than before and how that felt. It’s a feeling of saudade or something akin to it perhaps, as I write this. Thankfully, there will be another National Poetry Month next year! 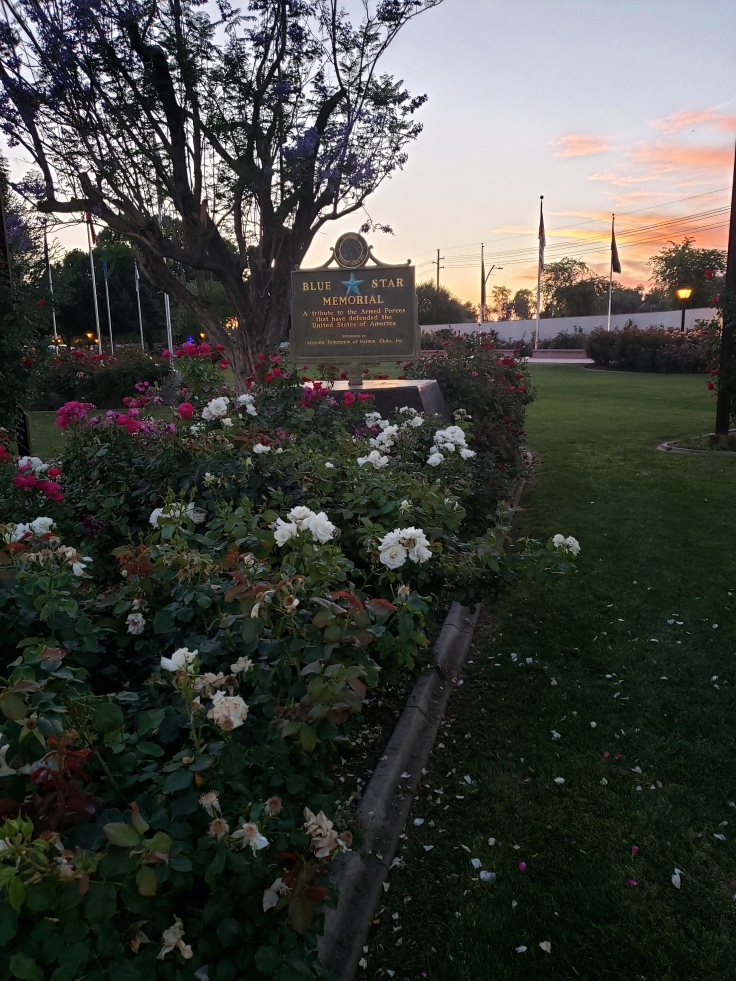 I wanted an Emily Dickinson poem (as I am related to her) and while I flipped through a tome of her entire retained poems, my incredibly supportive boyfriend found one with a rose in the title faster than I could. I somewhat randomly chose an area on the sidewalk and wrote out the poem as my boyfriend read it to me. (Note: If you do a sidewalk chalk poem in future, make sure to bring a kneeling mat or wear a knee pad or even just bring a towel. It’s not very comfortable to kneel down on a sidewalk with zero protection like I did. And do check your poem after finishing. I admittedly forgot to capitalize a few words that Dickinson did stylistically. DO get a chalk holder like I did to avoid getting dust all over your hands) 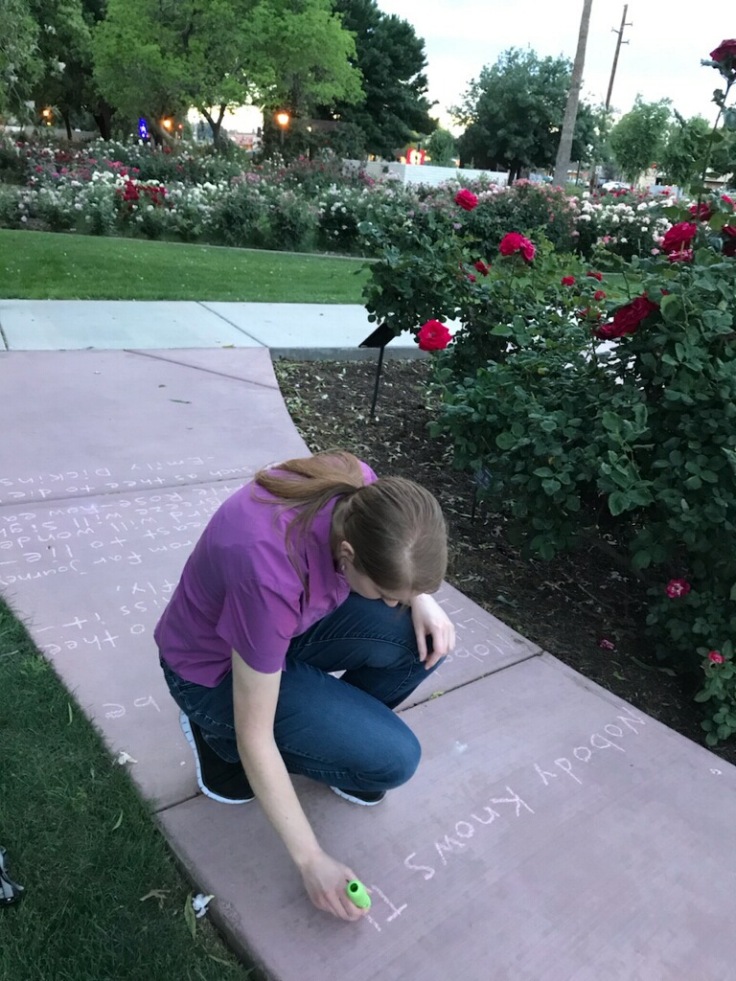 After I’d chosen the spot, my boyfriend noted that it was in the Veteran’s section, which I did not realize. A bit later he mentioned how appropriate the poem was for the place and time. You see, it was exactly one year after his dad, who was a veteran who had served in the navy, passed away. It was also less than a month away from the 12th anniversary of my grandfather’s death. He served in World War II. As I stood and read the poem I’d written, the significance of it all hit me. Nobody can know a rose once it’s gone. And on the ultimate day of poetry month, I penned the following shadorama poem as I reflected on the experience:

A woman who’d been watching curiously approached and praised my handwriting and the idea. That was a good feeling. My hope was that at least a handful of people would unexpectedly find the poem and find in it some bit of meaning. The next evening, I found myself driving again to the garden, just to see if my poem was still there. It was indeed, and I caught someone reading it! I’m not sure how long it will stay, or if it is gone already, but at least perhaps a few souls found a bit of pleasure in it, even if it was more like saudade. 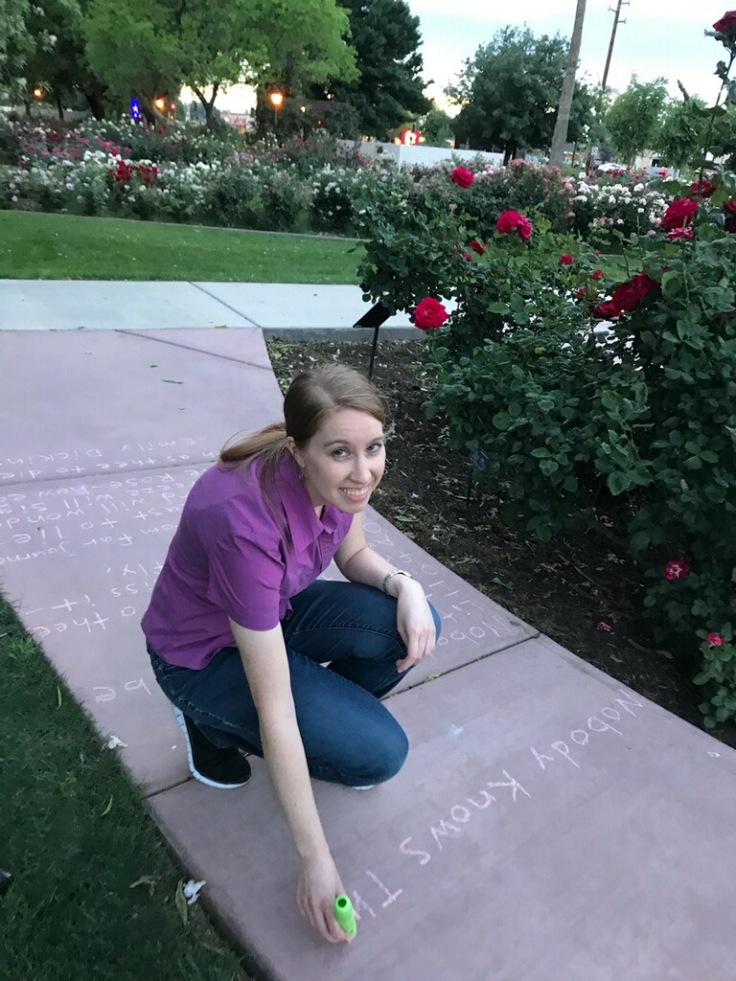 I learned about the word “saudade” from the music video below, which to me demonstrates the powerful ability of art to convey emotion and tell a story in a unique way. There is a making of video you can search for as well, that makes this story even more potent. For example, from context in the making of video, I gathered that the box of things that the actress is staring at in the beginning and end of the video seems to represent the last items that the father of the girl who inspired the video used on his final trip on earth. Enjoy!

Warning: This may be a tearjerker for some viewers. But I love the message found here! While remembering things gone, you recall the wonderful parts that make you miss that someone or something, and find joy in that remembering.

Receive a free gift when you sign up for my newsletter! Be the first to know about new happenings in my writing life! Subscribe to my newsletter
Follow aubriwilson.com on WordPress.com